As I've mentioned before, my brother and some friends are taking part in 11 challenges over 11 months in order to raise money and awareness. This month's challenge was in the form of a 6-a-side football tournament on Sunday held in Cardiff Uni's Talybont Sports Village (thanks to Paul from the Cardiff Uni High Performance Sport Programme, of which I used to be a member, for sorting the grounds for it). There were over two dozen teams entered and the weather was looking decent, so I decided to go along to watch, and was joined by my parents and the pup.

I arrived midway through the group stages to hear whispers of "watch them, they'll take you out". Unsurprisingly these warnings turned out to be about the Welsh Judo Academy team. In their defence most of them get their football these days from warm up dojo football where the rules aren't enforced quite as strictly, especially the physical contact rules.

As well as Welsh Judo there were 5 teams from Llangynwyd Rangers who I played for as a kid, a team of the organisers from my brother's house, a group of my mates from home had a team, a few of the bars from Cardiff were entered and a couple of under 16s local teams were about doing far too well against the teams of adults (although a few were on the cans all day so they had n excuse).

I decided not to play myself, partly because my eyesight problems are ruining my coordination and partly because it wouldn't be fair to unleash my many years of experience as a left back/sub on the other teams.

At the end of the day Llan Rangers donated money as well as a Real Madrid kit signed by Gareth Bale and Cristiano Ronaldo, which has had nearly as many visitors as the pup in the few days since. 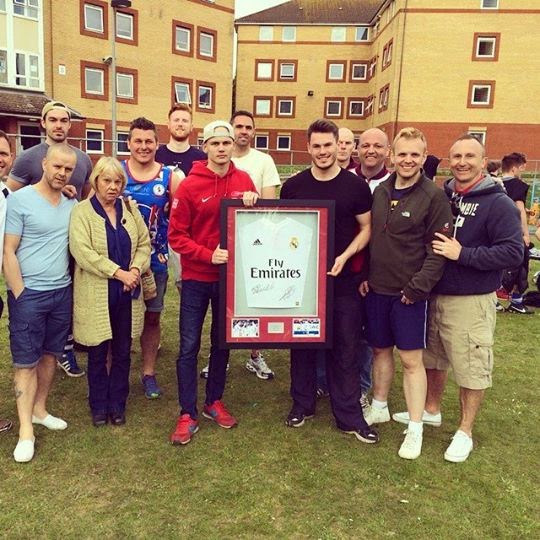 Thanks also go to Rob Matthews for coming down and taking photos, there are some crackers. Ill put a link up here when they get published.

All in all it was a really good day, and the boys organised it really well, even if the halls residents were complaining about the background music interrupting their revision (terrible excuses for freshers if you ask me). The day wasn't over after the football though, as there was an afterparty organised in Lab22 (thanks to Tani for that!) in the evening which I would attend, despite my recent issues with alcohol.

At Lab I had a couple of Amaretto Sours and noticed the eyesight problem kicking in straight away, but I powered through and made a discovery. After 1 drink my eyesight goes a bit crazy, after 6/7 drinks it evens out again. So in future I will be avoiding a casual pint and will just have to commit to being Out Out if I'm going anywhere near alcohol. Problem solved!

6 hours of drinking and chatting later we headed back to my brother's house for a kip. I woke up with a slight hangover but no headache once again. I'm starting to think my surgeon has magically removed my ability to get real hangovers, good lad.
Posted by Unknown at 10:13