A Farewell to Cardiff University

Over the last few weeks my activities have largely centred around Cardiff University. So much so I think I've spent more time there in the last month than I did this time last year as an actual student.

First up was my graduation. Even though I finished my degree last year I was unable to attend the ceremony due to being stuck in a crap training camp in Poland, so the university kindly allowed me to attend this year's ceremony instead. It was a pretty big deal for me to finally don the cap and gown as between a year in industry, repeating a year so I could switch universities and missing my own graduation it has taken me a grand total of six years to make the transition from Jamie MacDonald Fresher to Jamie MacDonald BSc (Hons).

In my head I always imagined the graduation ceremony to be like playing cricket in school: The vast majority of people involved just looking on bored while one person at a time actually gets to take part in the activity. While in many ways it was just like that, the ceremony itself only lasted an hour and a half from start to finish and from your seat it was possible to subtly snapchat as much as you wanted, so all in all there are very few complaints from me. Apart from the hat. The hat (or mortarboard if we're being technical about this) is the most annoying part of the "cap and gown" ensemble, due to the fact that it is a nightmare to put on. This won't be an issue if you let the professionals do it for you and then leave it well alone, I however decided to remove it for a while mid-ceremony and then spent the rest of the day trying to get the thing back on. Thankfully I managed to walk across the stage with my head still enough not to tip the precariously balanced hat off my head and onto the floor in front of the watching crowd.

Now, I've said that the event itself only took one hour and a half, which is fairly quick and definitely faster than expected. However, it could have been cut down to an hour I believe, with one simple omission: Middle names. I myself have two middle names (Keith & Warren) but when filling in the form online just put down Jamie MacDonald as my full name. If everyone else had followed suit we would've all been done and in the pub a good 30 minutes earlier.

Big praise has to go to the Ede & Ravenscroft photographer. He became the first person in over a decade to successfully get a photo of me smiling. Which is lucky because I couldn't really blue steel the crap out of my graduation photo, especially when it also included our first ever family photograph! 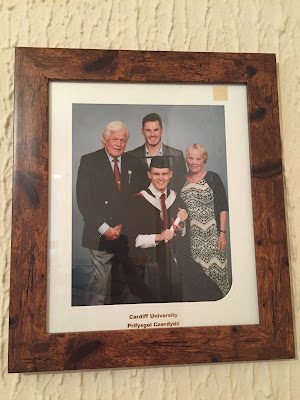 Having officially left Cardiff University through the form of my graduation I was back within days for a tour of the University's cancer research facilities in the European Cancer Stem Cell Research Institute. I have been looking into ways to directly contribute to research as opposed to donating to charities as this way I hope to get the maximum benefit per £ by cutting out the administration costs incurred by charities who fund this research.

As part of the tour I was given an explanation of the goals of the institute as well as the theories behind what they are doing there. Put simply they believe tumours are made up of two distinct types of cell: One which drives the tumour to move and grow; and another which makes up the main bulk of the tumour. Currently drugs are deemed successful or not based on the overall impact they have on the size of the tumour, however the researchers believe the impact on the driving cells is more important when it comes to halting the tumour and as a result many potentially successful drugs may have been discarded. Therefore they are testing previously discarded treatments as well as newly developed ones to see the effects they have on these specific types of cell.

I was also given a look at the advanced equipment the institute uses which enables them to do things such as separating individual cells for analysis, growing organs and tumours from stem cells and monitoring these organs and tumours with laser powered microscopes.

One of the most interesting possibilities that this research allows is for treatments to be tailored specifically to a patient. This process would involve taking a small sample of cells from the tumour and using that to grow an exact replica in the lab. This could then be treated and monitored to work out what the best approach would be for a patient's specific tumour. This approach could also be used to test any possible adverse effects the treatment could have on the affected organ to reduce the chance of unexpected side effects while maximising the impact on the tumour cells.
Posted by Unknown at 12:50