Finding My Sense Of Tumour

I've been a bit slow on the blogging front since my birthday, partly due to general laziness and partly due to the demands of the festive season (specifically the many extra nights out that happen this time of year), but as my Christmas present off my parents was an iPad keyboard case to keep me blogging on my travels I had better give it a whirl.

The topic for this blog harks back to before my birthday, and to an event organised by the Teenage Cancer Trust that I attended in the middle of November. Find Your Sense of Tumour is a conference split into two weekends, one for under 18's and one for those between 18 and 25, I obviously attended the latter. This year's event was held in Center Parcs Nottingham and, as no group was going from Wales, I travelled up with the South West group which encompassed Bristol, Taunton, Exeter and Plymouth.

My first challenge of the weekend came on Friday morning as I was required to wake up before midday, a significant challenge with my current sleeping pattern. Having woken up we travelled to Bridgend to pick up the new TCT officer for Cardiff who would be joining us and then on to Bristol. We were to meet the others at a pub just off the M5 where we would board the bus to Sherwood Forrest. While at the pub I made what would become a massive error in judgement, I had a glass of Coke and a cup of tea.

A couple of hours and half a dozen traffic jams later we were on a slip road off the motorway when my chemo blasted bladder decided to make me pay for my decision in the pub. I judged how far we had to go to get through the lights at the top of the slip road and guessed I'd have enough time to answer nature's urgent call. So, I disembarked the bus and started to empty my bladder at the side of the road, much to the amusement of the people in cars slowly trundling past. But, as I've mentioned before, since chemo I've developed a bladder capable of producing inhuman amounts of urine, and as I looked up at the bus and it's proximity to the traffic lights I started to worry, I was only three green lights at best away from being stuck on the M5. After two complete loops of lights I managed to cut the flow mid-stream and started sprinting up the middle of the road towards the bus, which was parked at the very front of the queue of traffic and was ready to go whether I was there or not. To add a bit of extra drama to proceedings the lights started to change just as I arrived at the bus door and jumped on.

We arrived at Center Parcs without further incident and settled into our cabins. I shared mine with a guy my age who was originally from Moldova that had suffered from Testicular Cancer and a 20 year old lad who was far more nimble that I thought possible for a man who'd had one leg amputated as part of his treatment. The first night was devoted to a welcome chat, food and then just general socialisation, which of course involved numerous beers. This gave me a chance to catch up with a girl who I've been speaking to via Facebook for a while who has the same tumour as me just on the other side of her brain, as well as meeting some of the others with her from the Birmingham area. 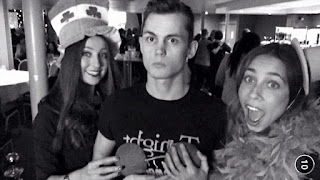 The next day was the start of the conference proper with the day starting at 9am and running until 2.45pm with breaks for lunch and coffee in between. The talks ranged from lecture style presentations to interactive sessions where the attendees could respond via interactive handsets and were almost always very entertaining and engaging as well as informative and relatable.

In the afternoon however I chose to leave the venue and head to Cafe Rouge on my own to get a break from the food that was provided with a steak and chips. The reason for this was that the theme of the talks was Body Image and Self Esteem, and as anyone that knows me will attest, I have very little need for help in that department, if anything I probably need to reduce it a bit.

Following on from my steak intermission I had a booking to take advantage of the free massage therapies available, which gave me a chance to have a giggle at the reaction I get whenever anyone tries to massage my shoulder and finds a collarbone in the wrong place. This was definitely one of the main things I was looking forward to before the weekend and it did not disappoint, I was relaxed and spaced out for a good eight to ten hours afterwards.

That evening was the Talent Showcase where groups and individuals from each of the areas competed to win one of the Oscars up for grabs on the final night. As you would expect the performances ranged from hilariously bad to surprisingly good and involved everything from dance to comedy. It was a nice change from the talks of the day and was a great backdrop of entertainment while everybody got on the beers yet again. Although I do feel like they missed a trick by not calling it "Britain's Got Tumours". Maybe I'll suggest it for next year.

The next day was the final day of the conference, and featured my favourite session of the weekend: The Eulogy of Toby Peach. The Eulogy was a one-man show that told the tale of Toby Peach and his admission to The Cancer Club and the events that followed. If you get the chance to see it I couldn't recommend it more, it was not only entertaining and funny but it was relatable to each and every young person sat in the audience who has been through a similar thing themselves.

The other notable moment of the day for me was my first introduction to a concept that I was previously unfamiliar with: Chemo Brain. Chemo Brain (also known as Mental Fog or Mild Cognitive Impairment) is a condition often encountered after cancer treatment - not just chemotherapy as the name suggests but also radiotherapy and even surgery - whereby your cognitive process can be impaired. This can lead to memory problems, issues with concentration and generally affect the way your brain operates. As soon as the condition was mentioned it was like a lightbulb turned on in my brain and suddenly the previous six months made sense. I had experienced forgetful patches consistently as well as having trouble with co-ordination a lot of the time. I had put it down to my double vision (well the co-ordination at least) but now I had a real explanation that made sense. Chemo Brain.

The evening brought a farewell firework display, followed by the Oscar presentations and a Fancy Dress Party. The theme was Film and our area all went as Spartans from the movie 300, which turned out to be an excellent choice as the room the party was in was roughly the same temperature as a blast furnace in the summertime. Although I won't lie, walking from the lodge to the venue in a spartan skirt while it rains is less than ideal. As the drinks flowed some dangerous shapes were dropped all over the dance floor and my extensive knowledge of the words to Frozen shocked pretty much everyone, then the DJ announced the last song and we headed back to our respective lodges, not at all looking forward to the hungover trip home the next day. 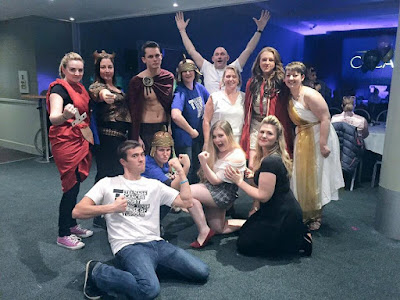 Thankfully the trip home didn't involve me getting stuck on a slip road while desperately trying to finish the worlds longest piss.

Overall the Find Your Sense of Tumour weekend was a really enjoyable and informative experience where I met a bunch of inspirational people who all had a common link yet at the same time each had their own story of how they had dealt with cancer at a young age. The only slight criticism I have is that it is geared mostly towards those that have been through cancer and are cured or in remission, and as such it could do with slightly more for those that are still dealing with the disease.