As anyone that follows me on any social media will be well aware, the last month or so has involved a lot of live music and the massive amount of track list revision that comes with arranging to attend three gigs in three weeks. First up was Craig David back in the third week of March, at the Cardiff Motorpoint Arena (formerly the CIA). This proved to be a massive challenge to my sobriety as I hadn't been to see any live music sober since I saw HearSay - coincidentally, in the very same venue - aged about 10. Fortunately this time the music was of a slightly higher quality as CD smashed it all night (I won't discuss the appearances of Big Narstie, a decision for which I'm sure you're all thankful). As I was "walking away" from the CIA my thoughts turned to "7 days" later when I'd be attending gig number two, this time at Tramshed Cardiff for Mallory Knox.

A much more lively affair this increased the pressure on, and eventually broke through, my plan to continue avoiding alcohol. As I was with my brother this time I felt that one or two bottles of lager would be unlikely to see me dribbling and mumbling my way around Cardiff on my own. The following morning I finally switched my revision to Divide and the "This Is: Ed Sheeran" Spotify playlist, ready for the biggest (and final) gig of the lot.

Rumours that we might get to meet the man himself (as the gig was in aid of The Teenage Cancer Trust) were flying around. This combined with the quality of his latest album were making for a very excited week preceding the trip to London's Royal Albert Hall.

The day of the gig arrived and the group from Cardiff TCT Unit all met up at Cardiff Central Station ready and excited for the day ahead. We boarded the train to London as a group and managed to sit as one group before channeling our inner 13 year old chavs by turning on a speaker and playing music to the rest of the carriage. The only difference to the aforementioned chavy teens being we were playing Ed Sheeran instead of Cally and Juice which we couldn't imagine any sane commuter having a problem with. We were, of course, wrong about that.

Just over three hours and one noise complaint later we arrived at the Royal Albert Hall and found a home for our bags while we waited for food and the gig itself to begin. As we had a few hours to wait for this the TCT had arranged a music workshop for us where we wrote and performed a couple of new songs that I expect to either top the charts soon  (due to my lyrical contributions obviously)  - or failing that, at least play a key part of Britain's next Eurovision entry.

As we performed our masterpiece together for the first time we were surprised by the appearance of some special guests in our midst: The support act had come for a listen. Although I had tried my best to stick in the background by writing lyrics I was dragged up to the microphones minutes before this arrival, so I now found myself singing (by singing I of course mean "subtly miming") in front a group of individuals who had been the soundtrack to my morning drives to school for years, Busted.

Settled back in our waiting room we had a preparatory talk from the organisers, ready for the arrival of Mr Sheeran himself: "No selfies are to be taken, this will slow everything down and a professional photographer will take group photos that you'll be able to download" was the warning issued. However when Ed Sheeran arrived some five minutes later the first words out of his mouth were: "Hi guys, if anyone wants a selfie or anything just ask and I'll be happy to take a few". You could feel the mood in the room take a massive upturn at this news, as most people had been stood with their Snapchat at the ready before the warning had been given by the organisers. As a result of this change of plans I ended up with this little pair of mementos before the gig had even begun: 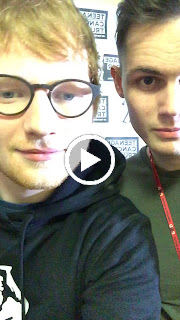 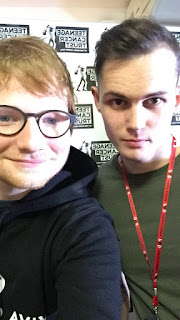 After the excitement of the meet and greet we were ready to go out to our seats for the support act who, as I've already mentioned, were such a massive addition to the lineup that they could've easily been headlining. So we sat down together and waited for the music to begin, then Busted stepped onto the stage and The Hall went crazy. Having seen Busted live fairly recently in Cardiff I was fully revised-up on all the songs and was happily loving life, singing along at the top of my lungs when, a while later, we were approached by representatives of the Teenage Cancer Trust and asked to follow them from our seats to a backstage holding area.

It had been explained to us beforehand that we would be going on stage as a group during the intermission between Busted and Ed, so this was clearly the moment. We were encouraged to take phones and cameras onto the stage and selfie sticks were provided for those that wanted them. I didn't need to join the crowd surrounding these as I had my GoPro and an extendable handle for that anyway.

A few minutes later, as we were lined up along a corridor the music built to a crescendo and we were told to walk onward and through to the stage. The Royal Albert Hall is a magnificent sight from the outside as well as from the stands. Neither view however, can match how it looks from deep in centre stage while the entire crowd light their phones and shine them together towards you as you're stood on the stage. Plus it allowed me to get a cracking photo for my Snapchat Story. 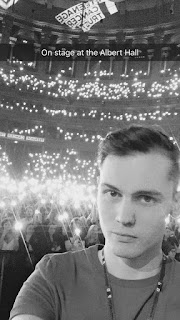 Once we had finished our minute in the spotlight we returned to our seats and a stand that was awash with excitement. Rumours abound suggesting that a VVIP had been spotted in the Hall, and that this person was none other than DB7 himself: David Beckham. Unfortunately nobody thought to go and tell him I was in the building and willing for him to have a photo with me, so a glimpse at the box he was in from across The Hall was the closest any of us got to meeting the footballing legend.

On the up side, this disappointment coincided with the start of Ed Sheeran's set, which drove any negative thoughts far from our minds. It turns out he is as good live as you would expect and he had the entire crowd captivated and clearly a large percentage of people had been doing the required amount of pre-gig lyric revision as almost every song involved portions of the crowd taking over and singing louder than the sound system, especially during the most popular songs like Galway Girl, Castle on the Hill and Shape of You. Fortunately I managed to stay focussed enough to get some well timed footage without getting completely swept up in the excitement and forgetting I had the GoPro with me for a reason. Selecting the most visually pleasing sections of film I made the following short video to show off two of the highlights of the evening: The crowd lighting their phones as we were on the stage and the crowd when Ed sang the words "I See Fire": 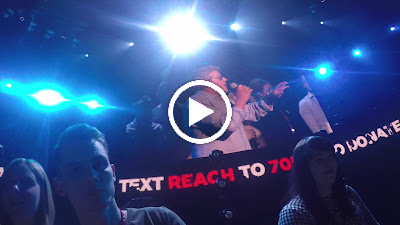 Putting Ed aside for a second I've also got a few small cancer related updates. The most interesting of which (for many at least) will be that as my tumour has started showing activity again I have decided to investigate some of the "alternate treatments" that I'm so often told to try. The first of these to be attempted is Cannabis Oil.

I've lost count of how many comments/messages I've had from people telling me that cannabis is a miracle cure for cancer. This is usually accompanied by a random online newspaper article about someone who has been "cured" by taking cannabis oil alongside the scientifically proven treatments like chemo and radio. I usually point out that without controlled research into its effects you cannot claim anything to be a "cure" for cancer, especially when you are receiving other treatment alongside. To me, taking cannabis oil while you're on chemo and then claiming the oil "cured" your cancer is not only stupid but dangerous behaviour. So, while I am aware that there could be some residual chemo in my system, the fact that my tumour has started to grow again makes me fairly confident that none of my previous treatments are currently active within my body and as a result, and positive signs at my next scan could be attributed to the cbd oil, at least tenuously.

While on the subject of Cannabis Oil I'll quickly outline the product I'm using and where I get it from: I found a company in the UK that produces cannabis oil vape pens that combine Coconut Oil with a THC free version of cannabis oil. The fact that the THC has been removed then makes this product legal for UK distribution as you won't get the "high" you would usually get from cannabis that contains the psycho-active substance. It was relatively cheap, just £50 for the starter kit that included the pen, charger and your first cartridge of oil from a company called Medipen. I've now moved onto my second refill, and have tried both the spearmint and fruit punch flavours. As I usually "smoke" it at nights before going to sleep I'm enjoying the Spearmint flavour most as I've usually just done my teeth for the night so it goes quite nicely with the already-minty taste in my mouth at that time of day.

Changing the subject slightly, I'm hoping to go to Japan with my brother very soon. Unfortunately I had to abandon my original plan to revive my 'Round The World trip once again, but am still hopeful of visiting a few of my intended destinations this year. So hopefully, the next blog will contain some positive news from an MRI as well as details of my trip away, but as anyone that has been following this blog knows only too well, even the best laid plans often go awry.
Posted by Unknown at 06:56