And So The Treatment Begins

I still have the events of the weekend to write about, but feel I should catch up chronologically, so I will just dedicate this paragraph to the weekend before moving forward to today. Friday two of my mates from the days down in Plymouth Uni surprised me with a visit to Cardiff and tickets to the Wales v England game at the Millenium Stadium. The atmosphere in the stadium was electric, and after a few pints during the match we were game to carry on. We headed out into town and had a few in Maddison DC. I'd been feeling like crap since London so was glad to take my mind off the cold, and even more glad to wake up with a minimal hangover. On Saturday I attended the biggest sporting event to take place in the capital that weekend, the Welsh Judo Championships. It was a good afternoon catching up with people, but I definitely prefer receiving a medal to presenting them!

Moving on to today, I was up at the ungodly hour of 11am to get ready for yet another drive to Cardiff. Today was the first day of my treatment which would include radiotherapy and chemotherapy. However, I first had a stop at a radio station to get on with. After my BBC Radio Wales interview last week I was to do a pre-recorded interview for Capital FM today in the Red Dragon centre. Once again I am proud to say I managed to not cough or sneeze once during the interview, Jamie 2 Cold Nil!

On arrival at Velindre I was given some information about the radiotherapy and asked to sign another consent form before being told to wait in the waiting room to be collected. I was then taken into the treatment room. This feels like a good time to explain a bit about what radiotherapy entails for those who may be unaware, basically you are clipped into a machine by your face as it whirs around you shooting X-Rays at the tumour.

More technically a machine that looks a bit like the one below (just considerably less shiny) has clips that the radiotherapy mask fits into to keep you still. Then you wait for a couple of minutes at most while the machine changes position and delivers X-Rays aimed at the tumour. The machine moves about to ensure that although the tumour receives a full dose of radiation the surrounding brain cells only receive a limited amount. 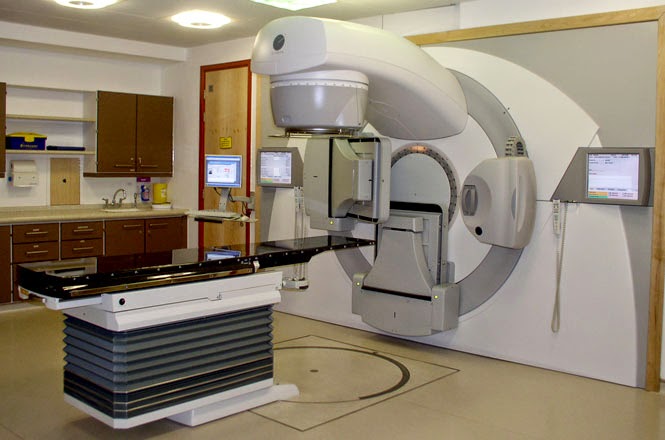 Unfortunately the mask is also quite tight, which may result in leaving there covered in honeycomb shaped marks, looking not unlike a lizard. On the up side, you feel nothing during treatment and it takes hardly any time at all so I was in and out of the hospital within an hour.

Along side the radiotherapy I am undergoing chemotherapy. My chemo is in the form of tablets to be taken every day. It works by killing cells as they divide, and as cancerous cells are constantly dividing whereas the majority of other bodily cells are not it attacks them more than other cells. However this can also attack those cells that are dividing a lot such as those in hair (hence the Heston look ready for possible hair loss).

Because I am having both radiotherapy and chemotherapy at the same time my chances of side effects are obviously fairly high, however in general they take a week or two to appear. So I will end this here because I need to squeeze as much gym in as possible if I want to gain that title of Most Shredded Cancer Patient. Especially as those damn steroids ruined my start!